This is a great song, and maybe half of a great video. The video, which was directed by Brian Grant and released in 1984, has a fun premise and a cool look… but, yeesh, it’s riddled with mortifying, cringe-inducing, cheeseball moments that almost bring the whole production—nay, the whole Duran Duran empire—to its knees.

The video is set in some indeterminate European country in some indeterminate point in time (the cars say 1940s, the hair and clothes say 1980s), which is occupied by hostile soldiers in natty caps, snazzy jackets, and shiny knee boots. As the video opens, Simon sits in a near-empty theater and watches actors rehearse a play. A leggy brunette, who is played by Patricia Barzyk, Miss France, 1980, observes him for a moment. She beckons one of the soldiers over and has a whispered conference with him. 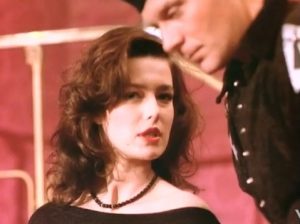 The soldier approaches Simon and demands to see his papers, which Simon produces without a fuss. There’s an emblem on Simon’s collar, something that looks like a “Z” with two lines through it. It’s the symbol of la resistance! Simon is the leader of a secret rebellion! To the barricades! 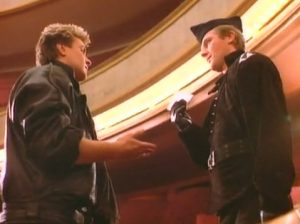 After being dismissed by the soldier, Simon trails Miss France out of the theater. Upon receiving a sultry nod from her, he hops on the back of her motorcycle.

Miss France is wearing a leather skirt and leggings while driving a motorcycle. Brave lady.

They zip through the cobblestone streets of a quaint village. There are clear signs of unrest: In the shadows, someone gets beaten by soldiers, while other soldiers force a man to scrub a spray-painted resistance logo off of a wall. A rebellion is brewing! The revolution will be televised, and everyone will have fantastic hair!

Somewhere in the village, Roger looks furtively about, then gets into a car and drives away. Kind of an unnecessary scene, but poor Roger tends to get overlooked a lot, so I can’t possibly begrudge him a scrap of screen time.

Next, we’re introduced to the world’s most ineffectual and glamorous weapons smugglers. Nick and John haul wooden crates labeled “EXPLOSIVES” out of a cellar and load them into the back of a horse-drawn carriage. Egad. While there’s a cheap thrill in watching these two lovely lilies of the field engaging in a bit of hard labor, relying on them to pull this off without blowing themselves to glittery bits sounds like a bad idea. 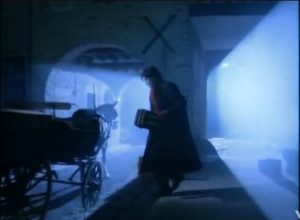 Here’s a question: If lives depended upon it, which Duran would you trust to deliver explosives to resistance fighters? My vote goes to Roger, though that’s mostly by default: Simon would cheerfully gab to everyone within earshot about his top-secret mission, John would be distracted by girls and/or sparkly objects and forget about the task at hand, Andy would get his nose out of joint about something and storm off in a huff, and Nick would flick lit cigarettes at his volatile cargo, just to see if anything interesting/fun would happen.

In an abandoned factory, Andy, who apparently showed up on set straight from the auditions for Newsies, operates an old-timey printing press and churns out flyers emblazoned with the resistance logo. Roger joins him. They marvel at Andy’s handiwork. 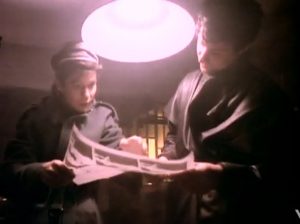 They get stopped at a makeshift checkpoint by a cluster of soldiers, all of whom tower over them. (Note: It is not difficult to tower over Roger and Andy.) The soldiers harass them a bit and scope them out from head to toe, then eventually let them pass. 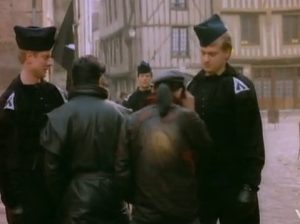 The whole gang assembles at a small tavern, with Nick and John abandoning their explosives-filled horse-drawn carriage in the street. Heh. Check out the way John and Nick glide into the tavern through the back entrance, one after the other, collars popped, looking shifty and slinky. 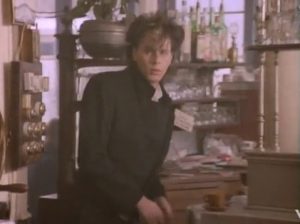 Nick, by the way, is sporting a fresh-scrubbed, low-makeup look, paired with relatively conservative hair in something approximating a natural hair color. I’d be concerned about this foray into normalcy, but I rest secure in the knowledge that the mad glory of Nick’s Arcadia image looms just a short year ahead in his future. Remember his Arcadia makeup and hairstyle? Awesome. Insane. Insanely awesome! If the whole Arcadia stage somehow passed you by, do a Google Image search for “Nick Rhodes Arcadia.” Then prepare to be dazzled. 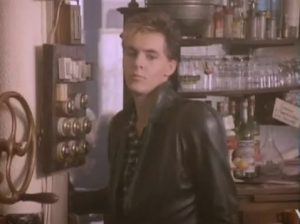 The group has a top-secret strategy meeting in the tavern. All the crusty old locals throw suspicious glances in the direction of the French beauty queen and the quintet of pretty pop stars cluttering up their usual drinking hole.

Post-meeting, Roger, Andy and Simon hit the cobblestone streets to secretly distribute Andy’s flyers to the townspeople beneath the noses of the guards. Andy, who’s still working an oddly fetching Oliver Twist look, is doing a crackerjack job of being stealthy and furtive.

Roger’s not bad at it either. Roger has a well-honed gift for flying beneath the radar. 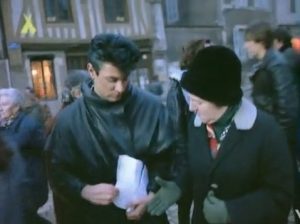 Simon, on the other hand… Simon is passing out flyers while singing at the top of his lungs and shimmying to the beat of the music. Simon is incapable of doing anything in a stealthy and furtive manner. 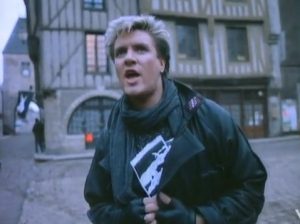 Night falls. Roger and Andy scurry around madly with a kite, which they fly from the top of a building. The kite, uh, extracts energy from the moon and uses it to zap out an array of electric bolts to serve as a beacon to alert the townspeople to La Révolution. 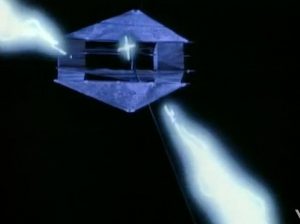 Yep. Duran Duran has figured out how to harness the power of the moon. And they’re using it to rig up a glorified disco ball. Sounds about right.

Meanwhile, Nick and John distribute their deadly cargo to the townspeople. That’d be John right there, with the red gloves, using an axe to whack apart that crate. You know, the crate with “EXPLOSIVES” emblazoned across it in huge letters. 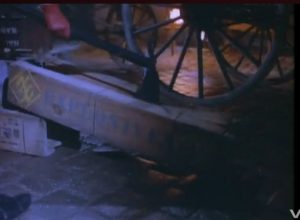 Oh, John. What are we going to do with you?

Simon waves a flag printed with the resistance logo and rallies the villagers. The soldiers charge into the town square on horseback. Oh, holy hell, they’ve got lightsabers. Why? What is this nitwittery? Between the moon-powered kite-beacon and the lightsaber-wielding soldiers, this video has pretty much gone all to hell in a matter of seconds.

Armed with John and Nick’s explosives—there’s a notable lack of explosions, so they seem to be nothing more than sparklers and fireworks—the townspeople and various Durans throng around the soldiers and drive them out of town. 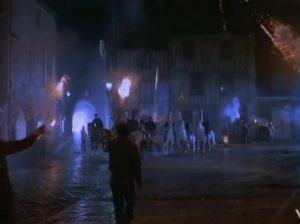 Evil is vanquished! The town is liberated, thanks to a moonbeam-shooting kite and a few sparklers! Everybody starts dancing in celebration! 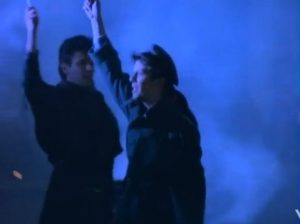 Yeah, it’s really sort of a dumb video. And it started out so well, too.

There’s still over a minute left in the song, so everybody just keeps dancing. And dancing. 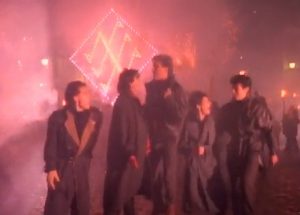 Permit me, if I may, to refer once again to Andy Taylor’s epic memoir, Wild Boy: My Life in Duran Duran (this is not the first time in these reviews that I’ve brought it up, and I’m sure it won’t be the last). In his section about filming this video, Andy, who never passes up an opportunity to take Nick down a peg, snarks on Nick’s dancing in this scene. Unkind! But pretty much on the money! Nick, under usual circumstances, does not dance. Nick may, if he deems it appropriate, unbend enough to shimmy his elegant shoulders a bit whilst playing his keyboards, while otherwise maintaining his usual glacial and imperious demeanor, but he does not dance. This video ably demonstrates why.

That’s the five-minute version of the video, which is a bit longer than the version that aired on MTV in the 1980s. There’s also an epic seventeen-minute version floating out there, in which Miss France’s role is fleshed out a bit—she asks Simon to let her in on his plans; Simon suspects her of being an enemy spy, but goes ahead and brings her along anyway, probably because he’s always had a weakness for leggy brunettes.

There’s also a bit of a side plot featuring Roger working in an office in the back of the theater, which seems very plausible; Roger is far and away the Duran most likely to hold down a sensible desk job on the side, just to have something to fall back on in case this whole “world-famous pop icons” lark doesn’t pan out. 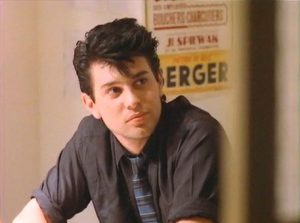 Also, the covert meeting at the tavern is much longer (Nick and Andy play handsies with a matchbook until they’re interrupted by soldiers), and it’s followed by a sequence where an elderly tavern patron smuggles Nick and John down into the wine cellar to show them her newfangled personal computer (hence the pretty green glow), which is being used in some (hazy, unspecified) way to aid the resistance. 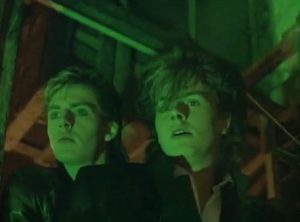 Really, the extended version might be worth a gander just for that. For reasons I can’t quite peg, everything John and Nick do together in this video fills me with glee. They’re like a dissolute, fabulous Brit-pop version of the Hardy Boys. 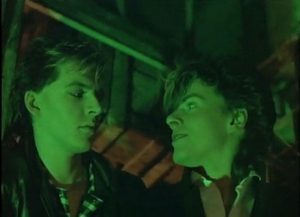 Also, I think they might be kind of drunk. 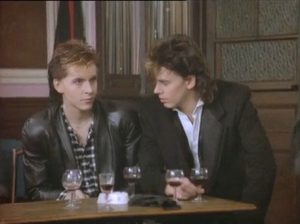 Oh, and Miss France does indeed betray Simon—she scurries off and tells the soldiers about the planned revolt. Roger and Andy warn Simon about her duplicity in time for him to orchestrate a trap for the soldiers.

And once again, the whole thing ends with more embarrassing, awkward dancing. Much, much more dancing. Three and a half minutes of dancing, in fact. The dancing goes on for so long that it somehow stops being mortifying and awful and wraps back around into awesomeness. Such is the power of Duran Duran.