Is there anyone out there who doesn’t like this song? Or this video? Seriously, pretty much everyone has warm, fuzzy feelings about this one.

“Hungry Like the Wolf” was one of three videos Duran Duran shot with Russell Mulcahy during a jaunt to Sri Lanka in 1982. Of the three (the others being the meditative “Save a Prayer” and the dirge-like “Lonely In Your Nightmare”), this is far and away the most entertaining. It’s a little short on plot, sure, but it’s joyous, rambunctious, bubbly fun.

We open with a bunch of bustling street scenes. Nick, Roger, John and Andy scurry madly about in search of their missing comrade, Simon. Nick has decided to be a slinky redhead this week, which coordinates nicely with his fiery red pants. Sadly, Nick is otherwise sorely underrepresented in this video—he pops up here at the beginning and puts in a few fleeting appearances throughout, but that’s not nearly enough of everyone’s favorite magical pixie for my tastes.

Simon, meanwhile, is hanging out at The Most Awesome Café in the World. There’s a man at the next table charming a cobra out of a basket! At Simon’s own table, another man is proffering an adorable little monkey to him! Simon has no time for charmed cobras or adorable little monkeys. In fact, he’s being downright surly. He glowers a bit and gestures with his thumb for the monkey to take a hike. This is not our usual chipper, plucky Simon Le Bon.

Then he stands up and, for no particular reason, flips over his table.

Next, he stomps around a crowded marketplace, singing his heart out while scanning the crowd, searching in vain for a beautiful woman (model Sheila Ming), who keeps popping in and out of the frame before he can spot her.

Y’know, upon close scrutiny, this is not one of Duran Duran’s more complex videos. No Afro-Caribbean zombies, no post-apocalyptic hellscapes, no mutants, no mimes, no lightsaber-wielding soldiers on horseback. It’s just about Simon’s quest to find a really hot woman.

Meanwhile, John and Roger hurry through crowded streets in search of Simon. Nick and Andy are nowhere to be seen in all this, so I’m going to go ahead and assume they couldn’t be bothered to fret about their missing friend and instead stayed back at the hotel to sip daiquiris by the pool. Seems plausible.

John is in such a mad panic to find Simon that he forgot to put on a shirt under his crisp white jacket. Oh. Right. This. This was something the boys kept doing during this stage—Simon also attempted to pull off the suit-jacket-with-no-shirt look in the “Save a Prayer” video, and even Nick and Andy gave it an ill-advised whirl in a photo shoot—but it never really caught on in mainstream society. Probably because it looks damn silly. And I say that as someone who, even now, genuinely likes most of the outlandish crap the boys wore during their peak years. Those headbands worn low across the forehead beneath long, eyelash-grazing bangs? Love those. Honestly and without irony, I consider it a very flattering look. The whole shirtless thing? Not so much.

Also, John? You’re a world-class beauty, and believe me, I mean this with affection, but seeing that much of your pale, bony chest makes me feel creepy and sad.

Now Simon’s in the heart of the jungle. Someone rows him down the river in a long boat while Simon crouches in the bow, bare feet gripping the sides, looking determined and maniacal. One thing I love about Simon is the way he commits, body and spirit, to filming these videos. No half-assed participation here. Like many Duran videos, this one is pretty much All Simon All The Time, and to give him his due, he holds the stage.

All that was my diplomatic way of pointing out that, at heart, Simon is a big old ham.

John and Roger corner a small shirtless urchin. John waves Simon’s photo in his face and yells at him until the poor kid is on the verge of tears from being harassed by these big-haired, ludicrously-dressed English boys.

Really, I imagine Sri Lanka was quite happy to see the back of Duran Duran when the shoot was over.

Simon crosses a rickety suspension bridge, getting his Indiana Jones on. Never underestimate the lengths to which Simon will go in his pursuit of a foxy lady.

There’s a lot of intercutting back and forth betwixt Simon and the rest of the boys, and the chronology gets a little tricky to suss out, because we seem to do a lot of moving backwards and forwards in time. All of a sudden it’s nighttime, and I’m going to proceed on the assumption, accurate or not, that we’re now in a flashback. The boys, sans Simon, are at some kind of outdoor party. Andy and Nick put in another ephemeral appearance, standing in a corner chatting with each other. Yeah, these two drew the short straws for this video.

Nick is his usual dainty, glamorous self; Andy is dressed like a cater-waiter. I get it, Andy, I do. You played fair for the first few videos and tried to shoehorn yourself into the glammed-out Duran Duran image—your ruffled poet shirt and frizzy bleached hair in the “Planet Earth” video certainly qualify as a solid good-faith effort—but it just wasn’t you. Fair enough.

So… these two. As I’ve mentioned before, Andy makes it quite clear in his memoir that Our Nick is not his favorite Duran (the phrase “Revlon-wearing tosser” is invoked, and no, it’s not meant with affection), on the grounds that Nick is spoiled and pretentious and control-freaky. Does Andy have a point? Well, sure. I mean, that’s kind of Nick’s whole deal, isn’t it? This, after all, is the kid who once bought a Picasso with his AmEx card, who was adored by Andy Warhol, who wore a pink satin tuxedo and lavender lipstick when he got married (do a Google Image search for “Nick Rhodes wedding.” Do it. Trust me, it’s totally worth it. His wedding photos defy description, and if they don’t make you cackle out loud in astonished glee, then you’re no friend of mine). I find Nick delightful and dazzling and hilarious, and I adore him with a nigh-Warholian fervor, but while beautiful, high-maintenance pixies like Nick are probably crazy awesome funtimes at, say, brunches and dinner parties, I can see how it might fray your every last nerve fiber if you had to work at close quarters with one.

So, Andy, I get it. Still, “Revlon-wearing tosser”? Really? You had to go there?

While Andy and Nick do nothing of any relevance to anything that happens in this video, John is making out with a beautiful woman. I would expect nothing less from John.

Somewhat less expected is that Roger, too, is making out with a beautiful woman. Look at Roger, getting down with his bad self! Even better, he’s making out with the woman of Simon’s dreams, who grabs him by the back of the neck and drags him in for a kiss. Roger seems a little dazed and surprised, but is totally okay with this. Roger is an agreeable sort.

Back to the present. Or the past. Whatever. I’ve lost track. Simon wades through nipple-deep water, still in pursuit of the mysterious woman, who seems to be stalking him through the jungle.

(Are there Unfortunate Overtones here, what with the beautiful dark-skinned native woman, whom the video is quite literally comparing to a wild animal, being hunted through the jungle by a pasty white English lad? Hells yeah.)

When next we see Simon, he’s lying on his back on some rocks by the water, exhausted and near-death. He’s still plucky enough to keep singing, even as a small urchin scampers up to him and wipes him down with a wet cloth.

And then we’ve shifted into another flashback, set at a gala party, where all the boys are resplendent in rainbow-colored suits. Simon chats with his friends, then meets the beautiful woman’s eyes from across the room for the first time and falls deeply in lust.

John is dressed like a glammed-out Colonel Sanders. And yet, somehow, he makes it work.

Back in the jungle, Simon and his dream woman finally, inevitably, collide. He gets up in her face; she claws him across the jaw.

And then we’re back in the café, where Simon is once again sitting at a table, only now he’s got visible claw marks on his neck. The whole time frame of this video is difficult to follow. Has Simon been sitting in the café the whole time, just daydreaming about the time he tussled with the woman in the bushes? It’s confusing.

Back in the jungle, Simon and the woman writhe around and wrestle and have themselves a whale of a good time. For the first time, we see she’s wearing a strapless one-piece bathing suit. An odd choice of apparel for cavorting about the jungle while stalking a Duran, certainly, but no odder than some of the random crap the boys have been wearing in this video.

The rest of the Durans spill into the café and have a jubilant reunion with Simon. 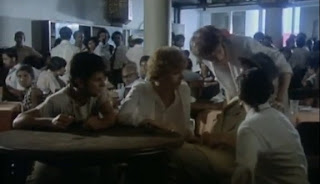 And then the remainder of the video is pretty much just a bunch of totally random scenes thrown together. We get more shots of Simon and the woman rolling around together in what appears to be foreplay to some truly mind-blowing sex.

We also have a flashback to John kissing yet another woman. It’s impossible to be certain, but it looks like he’s snogging Simon’s dream woman. If this is indeed the case, it means she smooches three out of five possible Durans in a single video, which has to be some kind of record.

There’s also this totally random shot of the boys ogling someone’s legs, which, between John’s exposed navel and Roger’s and Nick’s matching coquettish/flamingo-esque poses, might be the single greatest/weirdest/most hilarious moment in the entire video.

A damn fine video, frothy and airy and bright, the cinematic equivalent of a box of expensive, colorful, delicious macarons. Which, come to think of it, is a pretty good description of Duran Duran as a whole.