“Electric Barbarella” was a single off of Duran Duran’s 1997 album Medazzaland. This was a strange and bleak time in the band’s history: John Taylor had just quit, leaving only Simon Le Bon and Nick Rhodes, plus guitarist Warren Cuccurullo, to soldier on. For an assortment of reasons, neither the album nor the single nor the video, which was directed by photographer Ellen von Unwerth, made much of a splash upon release (though the song does hold the distinction of being the first single legally sold as a digital download). Too bad—the song’s fantastic, and the video is… well, it’s worth Duranalyzing. Here we go:

Simon, Nick and Warren stroll around a silver-walled emporium, which is lined with cases displaying scantily-clad mannequins. A bald, white-suited salesclerk, who straddles that fine line between attentive and creepy, assists them. The setting has a late-sixties/early-seventies kitschy sci-fi vibe to it—they’re referencing Barbarella, obviously, but there’s a touch of Logan’s Run here, too, with maybe a little 10th Victim tossed in as well. The Durans, it turns out, are looking to purchase a sexy robot. You know, for general carnal entertainment, and maybe a little light housecleaning.

It is probably already obvious that this video was Nick’s idea.

Meet Warren. Since the focus of most of my previous Duranalyses has been on the classic 1981-1985 videos, I haven’t talked much about Warren, who stepped in after Andy’s first exodus and played guitar for Duran Duran from 1986 to 2001. A talented musician with enough, er, colorful personal idiosyncrasies (the self-released porn films, the 9/11 conspiracy theories, the sex toy modeled on his wang) to make Nick and Simon look like a pair of stammering virgins, Warren is a fiercely polarizing figure amongst Duran fans. Prior to his association with Duran, Warren was the guitarist for Missing Persons, whose single “Walking in L.A.” was my anthem during my twenty car-free years living in Los Angeles; if for no other reason, Warren is mostly okay in my book.

Ah, the Many Faces of Nick Rhodes, Volume XXIX. Nick’s gorgeous “Electric Barbarella” image—the streaky orange hair, the near-translucent skin, the smudgy eyes—ranks high amongst my favorites. Bonus points for the way he matches his shirt to his hair and his necktie to his eyeliner. The man is a pro. Look upon his works, ye mighty, and despair.

After much browsing and deliberating at the sexbot emporium, the Durans settle upon the perfect purchase: an underwear-clad blonde robot bombshell. Simon forks over his credit card, and the gleeful Durans wrap Barbarella up in plastic and cart her home.

They deposit her in a bedroom decorated with pink walls, pink furniture, and a pink shag carpet. The unfinished feel to the room—unadorned walls, mirrors propped up on the floor—suggests the guys threw together a living space for their new toy without much care, while the general disarray—clothes and sundry items strewn around the carpet—suggests she’s not the first sexbot these nasty little Durans have brought here.

After consulting the instruction manual, they insert a battery into a sliding compartment on Barbarella’s back and bring her to life.

Nice shoes, Nick. My goodness, Simon and Nick are colorful in this video.

Barbarella’s first actions upon awakening are to lurch unsteadily over to the boys and kiss each in turn, giving them a mild electric jolt. Simon looks downright bored at getting smooched by Barbarella. I’m starting to think he doesn’t really have his heart into this whole “let’s get a sexbot, whom we will then share amongst the three of us” business.

The boys lace her into a corset and slap a frilly apron on her, then set her to work vacuuming and dusting. She obeys, though she displays no particular enthusiasm or knack for housework.

Barbarella, by the way, is played by model Myka Dunkle, who is a major reason why this video works to the extent it does. Not only does she look the part—she’s got that sixties Jane Fonda-Ursula Andress-Brigitte Bardot sex-kittenish image down pat—she also nails the role. Between her stilted, robotic movements and her wide-eyed, panicked expressions at all the demeaning crap the Durans make her do, she’s perfect.

More fun and games with Barbarella: The Durans loll around in bed together while using a remote control to operate her. They force her to dance and pose seductively for them.

Feeling like things are drifting into icky territory? You’re not alone—Canada’s MuchMusic network refused to air this on the grounds they found it “just not very tasteful.” I’m not denying anyone’s right to be outraged by the video, nor am I claiming it represents a watershed moment for feminism (and I’m sure as hell not using the word “tasteful” to describe it). To the charges of misogyny, though, I’ll just say this: the guys of Duran Duran, for all their cheerfully decadent and louche behavior, have always been pretty pro-woman, and their videos, for all their over-the-top sexuality (read: boobs), usually reflect this. In their videos, their default reaction is to surrender control to women—the vixens in the sleazy fantasy vignettes in “Girls On Film” are more predators than prey, Sheila Ming outmatches Simon when they tussle in “Hungry Like the Wolf”, and Reema Ruspoli is wholly unmoved by the boys’ desperate attempts to grab her attention in “Rio.” You can make an argument (pretty easily, actually) that “Electric Barbarella” glamorizes some wretched attitudes towards women, but the entire video is so campy and fluffy that it’s hard to imagine any malicious intent behind it.

Barbarella soon gets fed up with this nonsense and goes on a mini-rampage, in which she tries to electrocute and throttle the Durans. Which, really, seems to be no less than they deserve.

Next, we’re at a glittery party, where an increasingly rebellious Barbarella does a spectacularly half-assed job of serving drinks to surly guests.

The party is mostly comprised of slender, androgynous men and leggy, voluptuous women. Well, sure. This is exactly what happens when you leave Nick in charge of the guest list. (A choice quote from designer Antony Price, the man responsible for much of Duran Duran’s fabulous Rio-era wardrobe, taken from a Tatler profile of Nick: “His idea of heaven is being in a top restaurant surrounded by ten supermodels, discussing make-up. He’s a girl with male genitals.”) A sterling example of leggy voluptuousness would be Sophie Dahl here—model, best-selling author, journalist, granddaughter to Roald, and all-purpose knockout.

The band performs in the background of the party. Wow, there’s just a whole lot of stuff going on with Warren’s guitar. 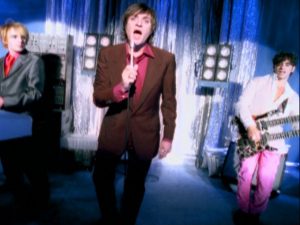 Check out Smirky McSmirkerson there at the keyboard. Nick, usually so glacial and aloof in videos, is clearly having himself a fine old time. This is his baby: He wrote the lyrics to “Electric Barbarella” (which, yes, are about having an affair with a robot), and while I don’t know this for certain, I will voluntarily surrender my honorary doctorate in Duran Duran* if it ever comes out that he didn’t dream up the concept for this video.

*I don’t actually have a doctorate in Duran Duran, honorary or otherwise. But it’s a lovely thought, isn’t it?

Barbarella glitches some more at the party. Apart from dropping drinks left and right, she also aggressively kisses and/or electrocutes guests, then breaks into a spasmodic dance. Back in the pink bedroom, her breakdown picks up speed. She flails around wildly and tears the place apart (which probably explains why the room was messy when the guys first brought her home: They’ve done this before with other sexbots, and this happens every time). When the Durans try to restrain her, she electrocutes them (Simon attempts to kiss her back into working condition, which: a) of course he does, and b) works about as well as you’d think).

They swap out her battery for a fresh one, but it’s no use. She continues her attack, then falls into a comatose state.

Okay! Wow! That was something! I’m sure there’s some philosophical lesson to be gleaned from all this, maybe something about the inherent dangers in buying a robot for sex and housework.

Mostly, though, I came away from this certain that letting Nick give makeovers is a bad idea. He heads straight for the fuchsia lipstick and shiny red stilettos, every damn time.