“Perfect Day,” Duran Duran’s immaculate version of the 1972 Lou Reed classic, appeared on Thank You, their 1995 album of covers. While Thank You was critically savaged upon release (Rolling Stone called it “stunningly wrongheaded”; the Irish Times dubbed it “the single worst album in the history of recorded music”), “Perfect Day” escaped the carnage relatively unscathed: Metro Weekly called it “far and away the best thing on the album,” while Reed himself referred to it as “the best cover version ever completed of one of my songs.” Duran Duran pulled off a beautiful, bittersweet rendition of a beautiful, bittersweet song.

The accompanying music video is the work of Nick Egan, who, over the past couple of decades, has essentially replaced Russell Mulcahy as the band’s default director of choice—in addition to “Perfect Day,” he’s also helmed the videos for “Ordinary World,” “White Lines,” “All You Need Is Now,” and “Pressure Off.” Egan does excellent work; all those aforementioned videos are beautifully shot.

From a narrative standpoint, however… Egan is a gifted artist, not a storyteller. Of his videos for Duran Duran, “Ordinary World” comes the closest to having a storyline, and that storyline is “a bride strolls around a garden on a sunny day.” Mostly, his videos feature meticulously-composed footage of the band members performing while looking very, very lovely. It’s all very nice, but I miss the deliriously chaotic throw-everything-at-the-wall approach of their early, narrative-driven videos. Granted, my affections are both fickle and shallow, but if it doesn’t feature the band members battling mutants in a post-apocalyptic wasteland or murdering each other on the Eiffel Tower, it’s probably not going to win my heart.

Nonetheless, Egan and the boys turned out a lovely video for “Perfect Day,” capturing the ethereal, melancholy feeling of the song via a series of gorgeous images. Let’s hit it:

The video takes place entirely on a small, boxy stage, which is painted a rich, saturated red. The film is slightly overexposed, giving everything a fuzzy glow. The mood is languid and hazy: Simon bobs and sways gently to the music like a hula dancer on Klonopin, while the remaining band members remain almost motionless. 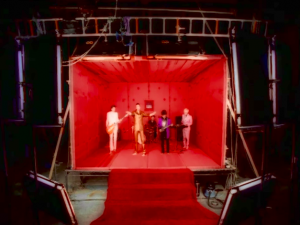 Egan shoots the Durans so they all look ravishing and luminous, nothing but sparkly eyes and translucent skin. Look at our boy Simon here, who appears unsettlingly lovely and unnatural, like he’s taken up residence in the uncanny valley. He looks like a character in a video game, or maybe a hyper-realistic Japanese sex doll. 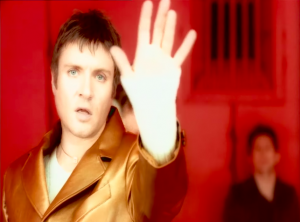 …yeah, I was investigating whether there’s a more formal name for “Japanese sex doll,” and I forgot to open a browser window in incognito mode before Googling that phrase, so my targeted online ads are going to be pretty interesting for a while.

The band members look lithe and glamorous in their sleek satin suits. They’re also all padding around the stage barefoot, so, y’know, if the Venn diagram of your favorite things in life features both “Duran Duran” and “foot fetishism,” this video falls neatly into the overlapping space.

John, wraithlike and somber in funereal white, spends much of the video skulking about. He slumps against the wall clutching his bass; he slithers around the floor on all fours. At one point, he slouches in a chair, his expression reflecting the bleakly nihilistic void of his soul as blood trickles down the camera lens; I’m not 100% clear on his character arc here, but I’m guessing it’s not “John is having a super fun time and is perfectly content with his life at this moment.”

Even while suffering from a quiet existential crisis, the man sure does photograph beautifully. 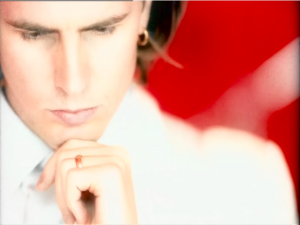 Yo! Roger Taylor! How lovely and unexpected to see you here, sir! This is 1995, remember, a decade after Roger quit the band to live in peaceful obscurity and a good half-dozen years before he’d return to the fold, so his appearance in this video is a delightful surprise. Duran Duran has weathered a few lineup changes over the decades, and while the rotating string of guitarists—Andy to Warren to Andy Part Deux to Dom—has mostly served to inject a fun element of unpredictability, it never seems quite right to see anyone but Roger perched behind the drum kit. 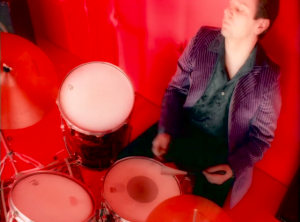 Speaking of Warren… There he is, sitting cross-legged on the floor, playing a sitar and getting his Ravi Shankar on. This arrangement of “Perfect Day,” by the way, is an aural joy, with complex layers of lush instrumentals supporting Simon’s wistful vocals. (Here’s Lou Reed talking about the song on the Duran-themed episode of Behind the Music: “I’m not sure that I sang as well as Simon sang it. I think he sings it better than I. If I could’ve sung it the way he did, I would’ve. It wasn’t from lack of trying.”)

Ah, here’s the preternaturally elegant Nick Rhodes. He’s plunking away at a doll-sized keyboard, which, in keeping with the minimalist staging, looks like he found it inside a cereal box. Nick is that rare creature who can make dressing from head to toe in shiny pink satin look like a good idea.

You can put the mirror away, Nick. You know you’re flawless. 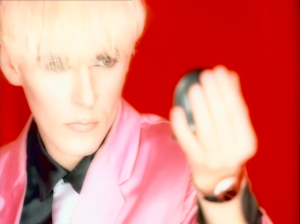 All this hazy, languid tranquility is interspersed with blipverts of unsettling images: time-lapse footage of roses blooming and dying, sketches of skeletons adorned with flowers, military helicopters, atomic bombs. It all speaks to the greater point of the song: “Perfect Day” is not to be taken at face value, blissful lyrics about drinking sangria in the park and feeding animals in the zoo notwithstanding. The subtext of “Perfect Day” involves heroin addiction, a connection that would become explicit in 1996, when Reed’s original version popped up on the Trainspotting soundtrack. As a 1997 piece in The Independent put it, “‘Perfect Day’ is not about heroin because it was used in Trainspotting. The song was used in Trainspotting because it is about heroin.” 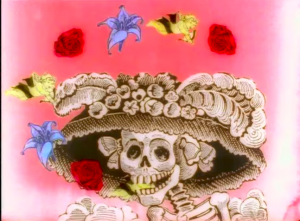 (As is often the case when analyzing music lyrics, there’s no critical consensus on this interpretation. A separate article in The Independent, posted three weeks after the first one, makes an argument for taking the lyrics of “Perfect Day” literally: “If Lou Reed wanted to write a song about heroin, he did—and called it ‘Heroin.’” The piece goes on to refer to the Duran Duran cover as both a “futuristic nightmare” and an “heroic failure,” so make of that what you will.)

We’ll give the final word on interpretation to Simon: “I imagined I was singing it to my daughter Amber, and suddenly the song became mine. It’s such a beautiful song, it doesn’t have to be about heroin.” 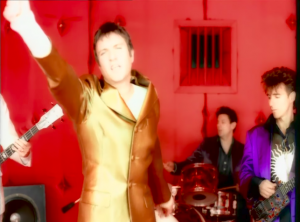 Fair enough, Simon, and well done, Duran Duran. You knocked this one out of the park.

There’s also a Duranalysis book, which consists entirely of never-published-elsewhere material. I’d be grateful if you considered purchasing it.