Where are you now? ‘Cause I don’t want to meet you…

I briefly touched on this one a few years back in my Duranalysis of the band’s agreeably half-assed 1981 video for “Careless Memories”, but it’s worthy of in-depth scrutiny on its own. This is the delightfully bonkers anime-style video (we’re all calling it “Duranime” from here on out, yes?) that played on the screen behind Duran Duran while the band performed “Careless Memories” on the 2004 Astronaut tour.

The animation for “Careless Memories” is the work of artist Fumio Obata, while the project itself is the brainchild of visual designer Gary Oldknow, a frequent Duran Duran collaborator. Oldknow’s hand-drawn storyboards are posted on his professional site, and scribbled across the very first panel is this iconic phrase: Neo-Tokyo is about to explode. Look, if you use an Akira reference around me, you automatically win massive brownie points, because Akira is the coolest damn movie ever made. Use an Akira reference in a Duran Duran-related context? That’s taking it to a whole new level. You’ve got two of my favorite things in life wedged into a single storyboard panel. We’re in good hands here.

On with the Duranime! In Tokyo, Duran Duran (including once-and-future prodigal son Andy. Hey, Andy! Good to see you, mate) performs for an adoring crowd made up entirely of cute wide-eyed girls in tank tops.  I can confirm that a significant percentage of the audience at an average Duran Duran concert consists of cute wide-eyed girls in tank tops, so this all seems grounded in stark reality thus far. 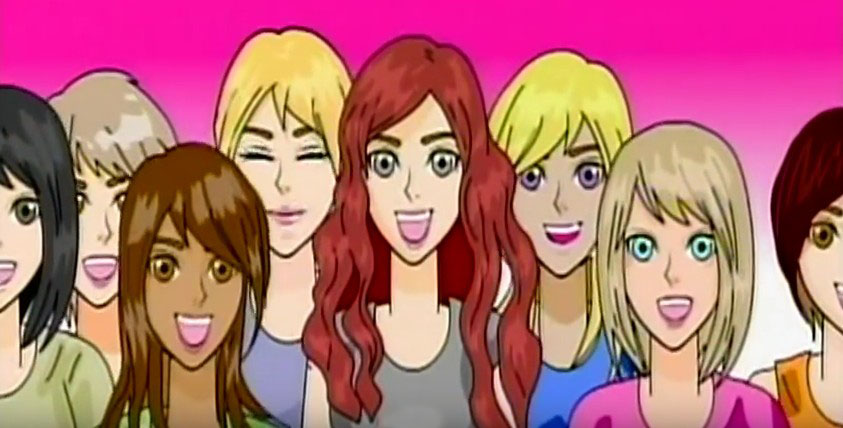 But wait! During the concert, the Durans are ambushed by a slew of sinister masked men in business suits, all of whom are armed to the gills with swords and guns. Wielding his microphone stand like a samurai sword, Simon chops one of the assailants in two. A geyser of blood splashes over him. A fanged, blood-splattered, red-eyed Simon smiles maniacally. 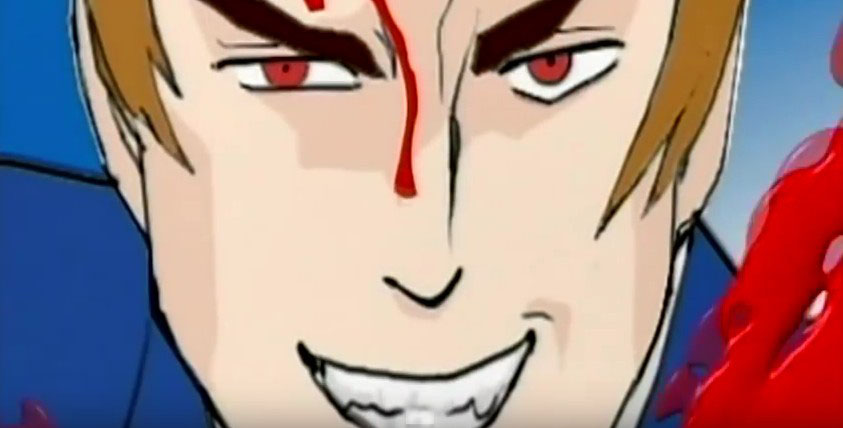 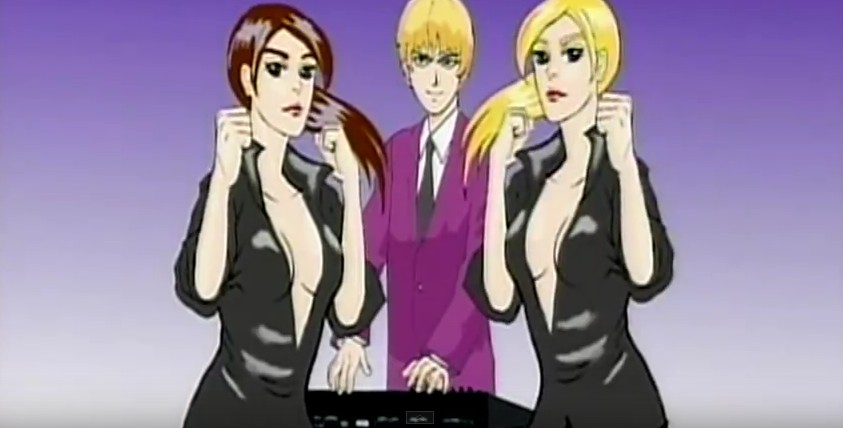 A ninja goes down with a pair of stiletto heels to his eyeballs. 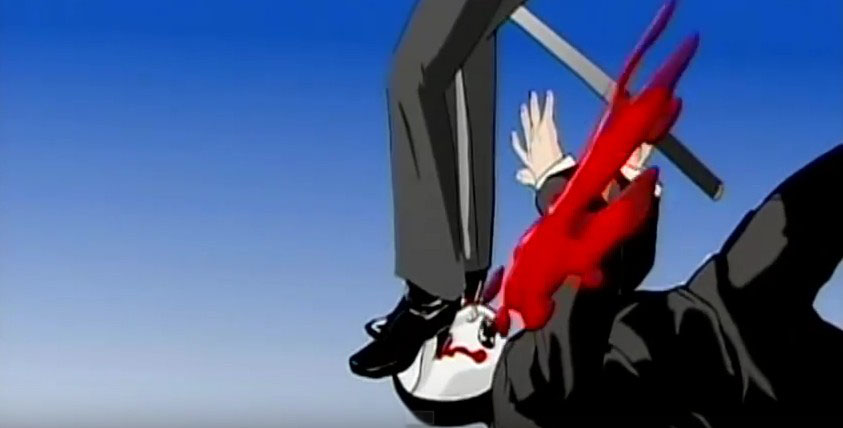 Nick whips out his Suzuki Omnichord* and shoots bolts of electricity at the ninjas, which (somehow) causes them to spurt more geysers of blood. This is a ridiculously bloody video. I approve. 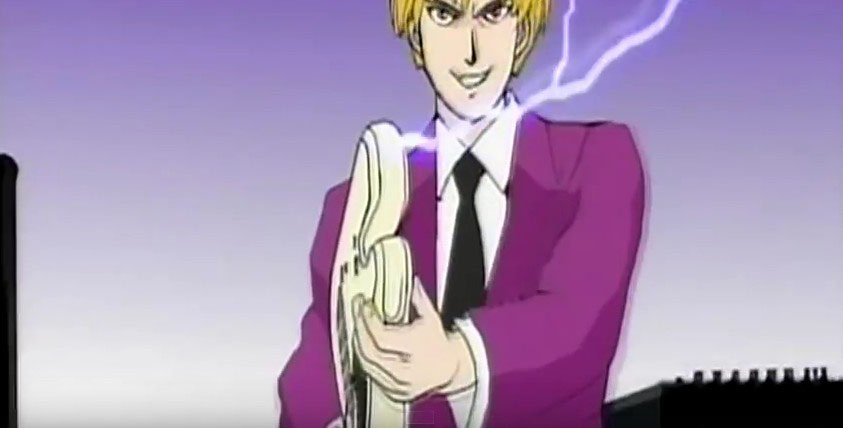 *An Omnichord is essentially a portable electronic autoharp, invented in the early eighties. I have no idea how ubiquitous they are these days, though it might be worth noting that I’ve only ever seen Omnichords in various Nick Rhodes-related contexts, like his promo video with Stephen Duffy for The Devils’ “Big Store.” 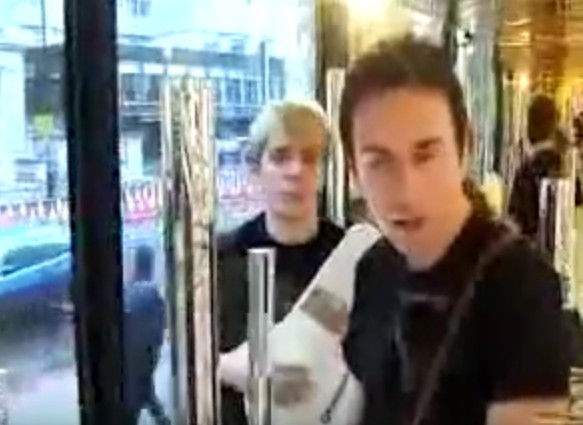 While we’re on the subject of Omnichords, let’s take another look at Gary Oldknow’s storyboards. Apart from Oldknow’s own scribblings, they’re peppered with terse notes from an unidentified party (sample note: “not guns!!! guitars and omnichord”). Unless I miss my guess, those notes came directly from Nick. Why would I assume that? Because: a) “Omnichord” is specifically name-checked multiple times, which is a dead giveaway right there, and b) the official Duran Duran website more or less directly confirms this (“Nick did personally contribute ideas and concept for the story board”). Evidence to the contrary: The notes are typed in, ahem, Comic Sans. I’m willing to believe any number of outrageous rumors about Nick (that report from a former girlfriend about how he wears custom-made fangs in bed? Sure, yes, that seems very plausible), but that he voluntarily uses Comic Sans, the world’s most reviled font? Hmm. I have a hard time swallowing that.

Back to the Duranime, where Roger is slaughtering ninjas by embedding his cymbals in their skulls. Roger only seems mild-mannered, y’all. 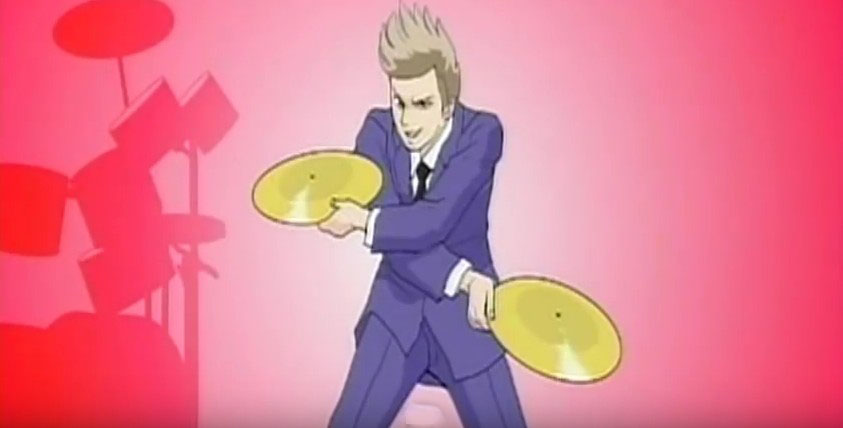 Not to be outdone, Andy impales a ninja on the neck of his guitar. Cue more geysers of blood. 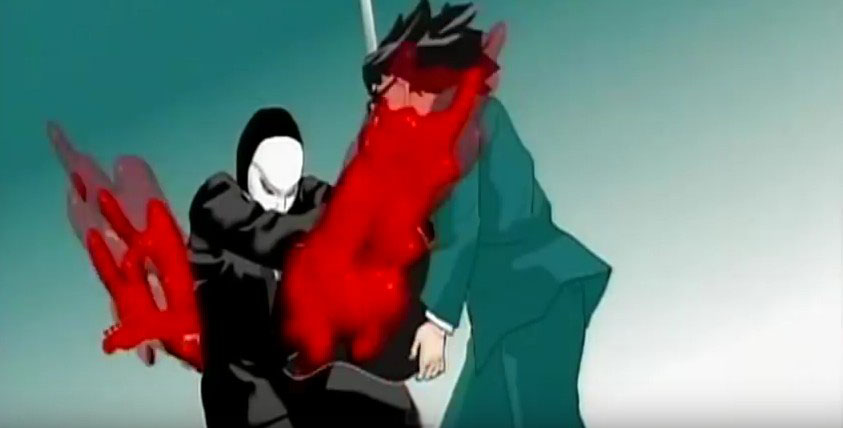 John turns his guitar amp up to eleven in true This is Spinal Tap fashion (which is apropos—I dare anyone to watch the classic Duran Duran documentary Sing Blue Silver without thinking of Spinal Tap) and obliterates a gaggle of ninjas by blasting them with a sound wave. There is no resulting geyser of blood. Disappointing. 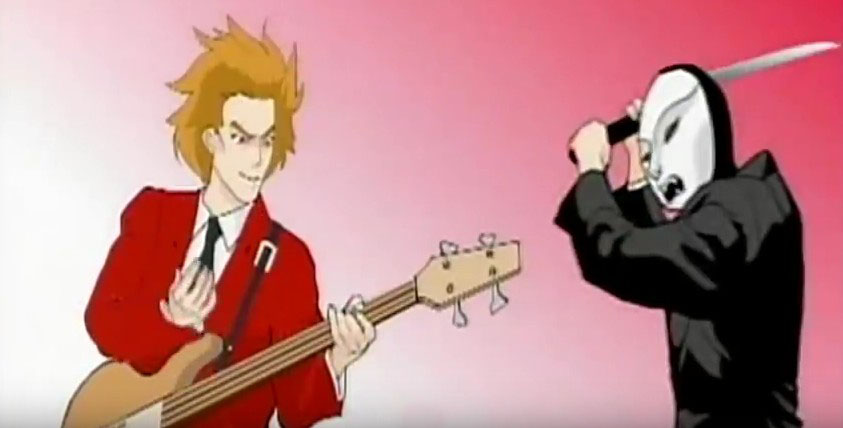 And then things get really weird.

The Durans all sit at an outdoor café, just chillaxing after their impromptu ninja massacre. A Godzilla-esque monster comes crashing through the streets of Tokyo (or Neo-Tokyo, as the case may be), demolishing skyscrapers and causing throngs of cute wide-eyed women in tank tops to scurry about in terror.

At the same time, a fleet of UFOs arrive and start blasting the city into rubble, while an army of killer robots take to the street. Even by Tokyo’s standards, this is a pretty eventful afternoon. 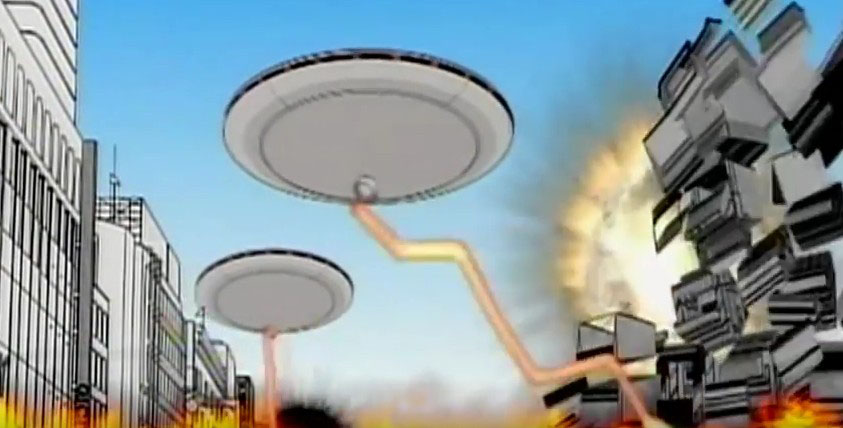 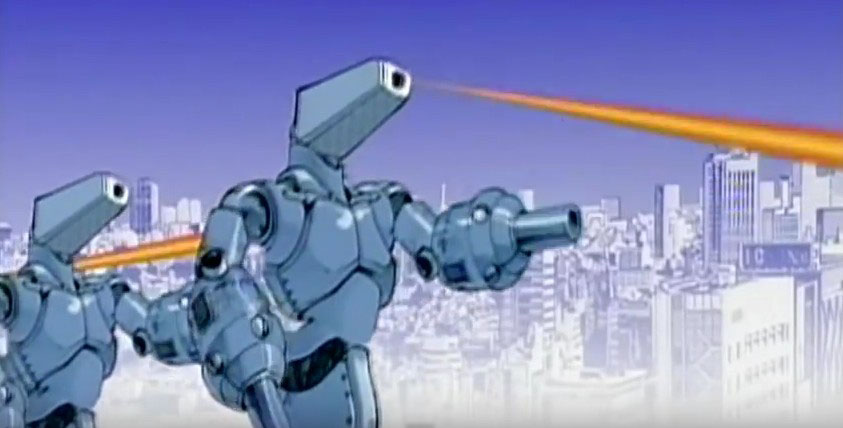 Luckily, the Durans are on hand to get this mayhem under control. Simon whips out his microphone stand and chops the robots up into component parts.

The military swoops in, with jets and tanks, but they’re powerless against Godzilla. This isn’t a job for the armed forces. This is a job for pop stars! Simon adjusts his belt buckle, which is emblazoned with the mysterious Z-with-arrows-through-it symbol first seen back in the “New Moon on Monday” video, which causes all of the Durans to grow to Godzilla-equivalent sizes. There’s a joke in here somewhere—something, something, Simon’s ego—but I can’t quite make it work, so let’s just move on. 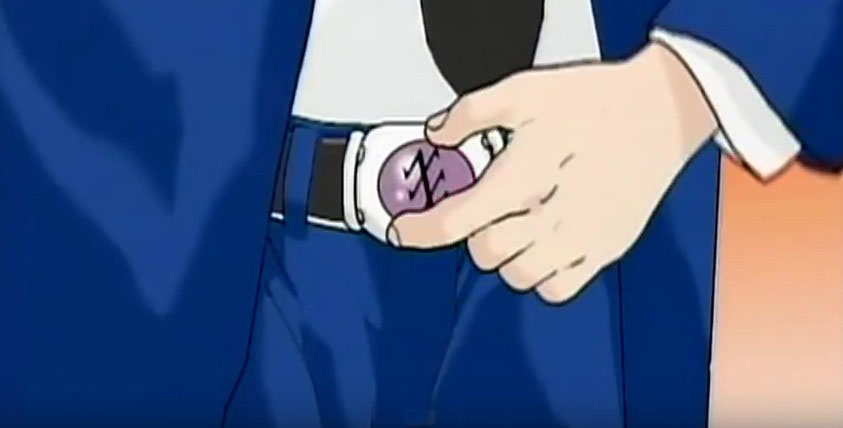 Before dealing with Godzilla, a giant-sized Simon takes time out of saving Tokyo to smash the EMI building into rubble. Back in 1997, Duran Duran was dropped by their label EMI after the disappointing release of Medazzaland; based on this video, it’s safe to assume the band members are still nursing grudges. Spiteful, petty, hilarious grudges.

(As fun-loving and easygoing as the band members seem, I have no doubt they can—and do!—hold grudges until the end of time. I have this fond mental picture of Nick sitting in a dark, cavernous room somewhere, lit by candelabra, narrowing his beautiful eyes into slits and dipping a fountain pen into a decanter of freshly-drawn blood before carefully scrawling the names of everyone who has ever wronged him into a gold-embossed notebook.)

The giant-sized Durans team up and defeat the Godzilla-esque monster (John punches it in the snout, which is a nice touch). 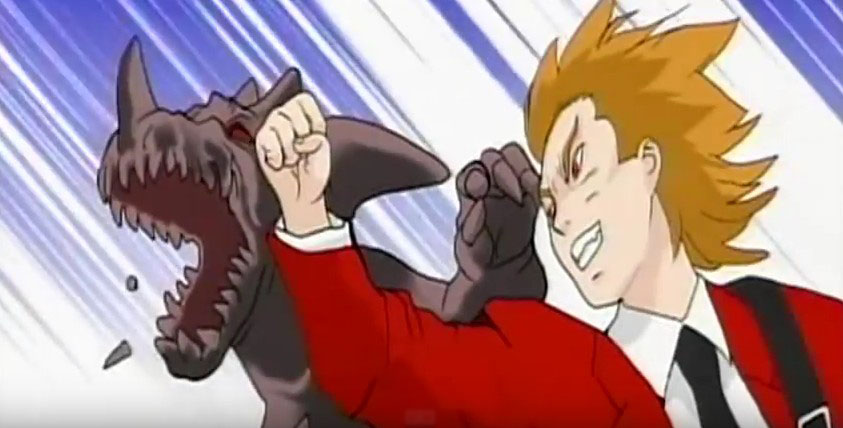 No time for celebration, though: As the guys glower in steely determination, Mount Fuji erupts in the background. 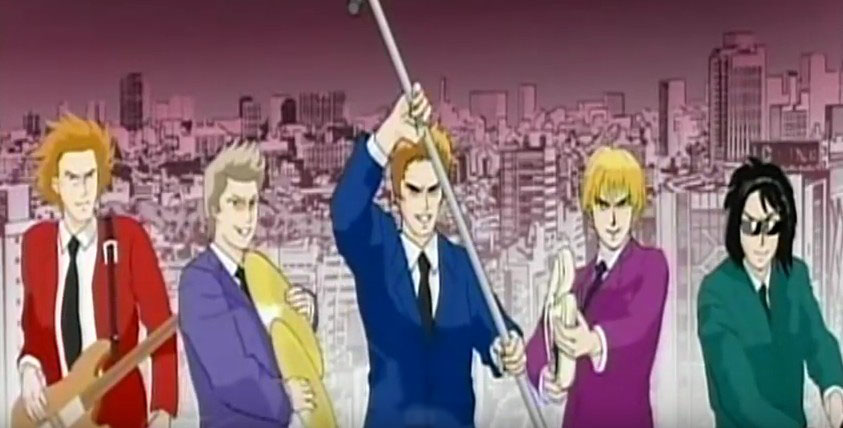 Okay! That’s the video! Pretty great, right? I’ve waxed philosophic before about Duran Duran’s deftness at synthesizing music and pop art and pop culture, particularly through their videos; this video is a sterling example of that. Their instincts are 100% on point here. They’ve captured the gonzo spirit of classic anime (masked killers! geysers of blood! murderous robots! freaking Godzilla!) and integrated it seamlessly into the Duran Duran brand. Nicely done, guys.